Grab your chance to ‘bag’ two iconic features of the Cleveland Way on this circular walk from Great Ayton around Roseberry Topping and the site of Captain Cook’s Monument.

Although not actually a mountain, a walk to the top of Roseberry Topping is a thrilling expedition – especially for children! Upon reaching the summit you are rewarded with one of the best-known viewpoints on the northern moors, offering a spectacular 360° panorama of the surrounding landscape. What can you see when you reach the top?

The hill itself is steep sided and capped with hard sandstone. While the soft shales and clays around this sandstone have been worn away by ice, wind and rain over many centuries, Roseberry Topping has been protected by the harder sandstone cap.

The hill was once smooth and symmetrical until in May 1912 the western flank collapsed as a result of mining and unstable geology, resulting in the distinctive shape we see today.

Cook’s Monument was erected in 1827 on Easby Moor to honour Captain James Cook, one of the world’s most famous explorers who was born in Yorkshire in 1728. Some of Cook’s achievements include several voyages along the Pacific Coast, during which time he mapped the coast of New Zealand and became the first recorded European to encounter the eastern coastline of Australia. Cook grew up at Airey Hill Farm, visible just below Roseberry Topping, and went to school in Great Ayton. He would have spent much of his free time exploring Roseberry. Maybe it will inspire you to explore other places too!

Stock up on refreshments in Great Ayton, which is home to numerous cafes, pubs and restaurants. 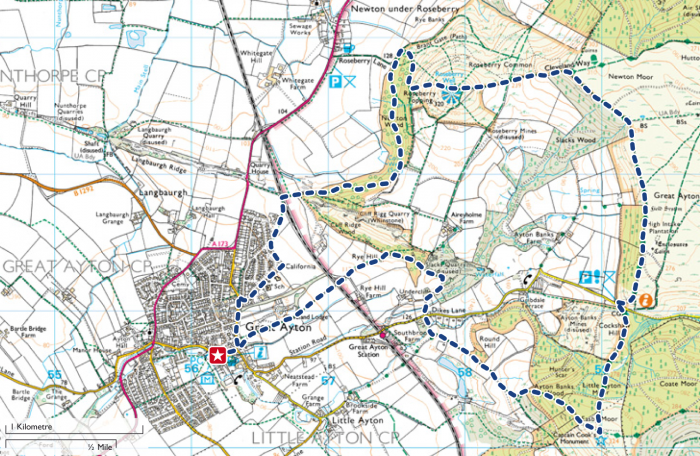 If you enjoyed this then head for . . .
Cringle Moor or Live Moor (from Clay Bank): two great climbs with fantastic views.